From Sarajevo via Trondheim to Kaiserslautern

Dino Mehmedagić comes from Bosnia-Herzegovina. The 26-year-old specialized in "Embedded Systems" during the course of his electrical engineering studies. After completing his bachelor's degree in Sarajevo, he found the perfect master's program for this: the European Master in Embedded Computing Systems (EMECS). The TU Kaiserslautern offers the two-year program together with three partner universities. 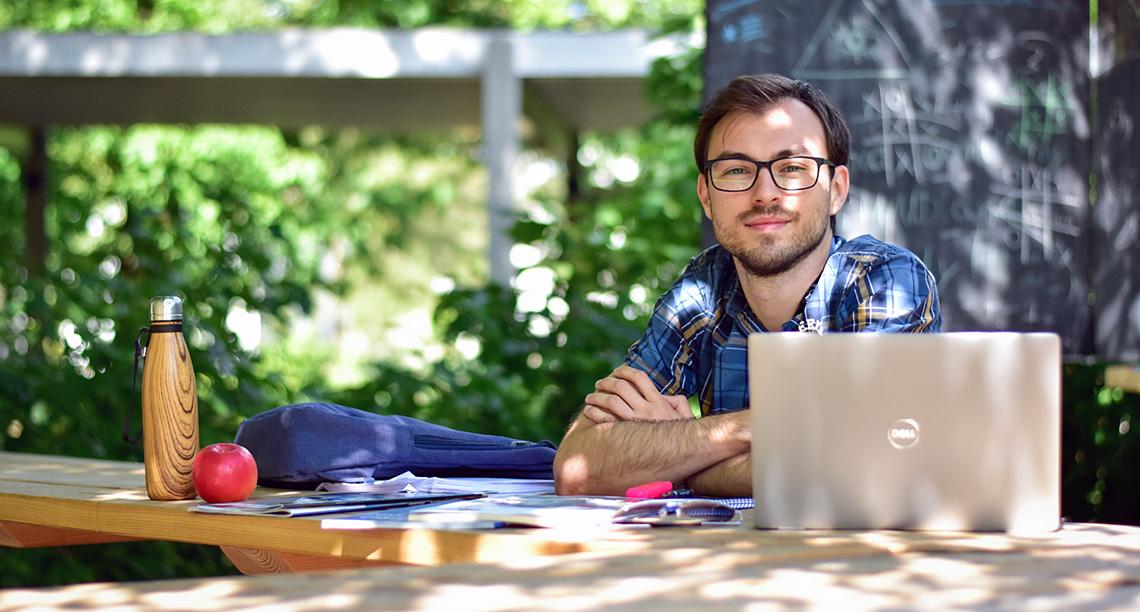 Embedded systems consist of hardware, software and an operating system. They can be found in cars or smart phones and transform classic manufacturing technology into a smart factory by processing data and controlling processes in complex technical environments. They are each designed to perform a specific task - in the same way that a watch serves as a timekeeping system.

Bachelor in Sarajevo
Dino Mehmedagić is now an expert in the world of embedded systems: "At the beginning of my studies, my focus was on teaching existing hardware to perform a function by means of programming. Later, I specialized in writing the code that drives the design of a future hardware."

The path to his current qualification has taken him abroad. He completed his bachelor's degree at the International University of Sarajevo, a private university. There he got his first taste of international air, spending two semesters abroad in Turkey. "That broadened my horizons," he says looking back today.

Excellence Master's in Kaiserslautern
In his search for the right master's program, a friend gave him the tip to find out about the Erasmus Mundus programs. These excellence courses are offered jointly by several European universities. TUK is the lead institution for EMECS and cooperates with the Norwegian University of Science and Technology in Trondheim, the University of Southampton and the Politecnico di Torino.
"If you are interested in embedded systems in all facets, EMECS is a great stepping stone," says the young Bosnian. "And I was even lucky enough to get one of the coveted scholarships, which provides me with basic funding." He spent the first academic year 2018/19 in Trondheim because he was curious about the far north. Afterwards, he came to Kaiserslautern and does not regret this step: "There is almost everything you need here. And it's very pleasant to live in because the city is down-to-earth and clearly laid out." He's also taken a liking to the campus - especially the hammocks in the greenery, which invite students to take breaks to relax.

Keeping an eye on secure hardware
During his scientific training at TUK, he discovered new fields of activity for himself: verifying embedded systems and systems-on-chip (SoC) with regard to functional security. This already happens in the development phase. In concrete terms, the aim is to prevent hacker attacks and data leaks at an early stage. This is essential, not least for particularly security-relevant technical applications, such as in medical technology or autonomous driving.

Staying at the TUK
Accordingly, Dino Mehmedagic wrote his master's thesis in the group of Prof. Dr. Wolfgang Kunz, who is EMECS program coordinator. The latter developed a special methodology called UPEC "Unique Program Execution Checking" to detect security vulnerabilities in hardware architectures. The initial focus was on confidentiality - that is, ensuring that sensitive data is kept safe. Starting from the basic concept, Dino Mehmedagic also explored the aspect of integrity and developed an adapted methodology. This makes it possible to ensure that potential attackers cannot alter the operation of an embedded system.
Since he gathered many ideas in the course of his master's thesis on how the methodology can subsequently be refined and developed, he continued with a doctoral position in 2021. Thus, the young engineer will spend even more time in Kaiserslautern.